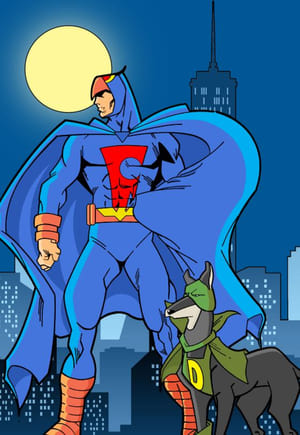 Dynomutt, Dog Wonder is an American animated television series produced for Saturday mornings by Hanna-Barbera Productions. The show centers around a Batman-esque super hero, the Blue Falcon, and his assistant, bumbling yet generally effective robot dog Dynomutt, who can produce a seemingly infinite number of mechanical devices from his body. As with many other animated super-heroes of the era, no origins for the characters are ever provided. Dynomutt was originally broadcast as a half-hour segment of The Scooby-Doo/Dynomutt Hour and its later expanded forms Scooby's All-Star Laff-a-Lympics and Scooby's All-Stars; it would later be rerun and syndicated on its own from 1978 on. The cast of The Scooby-Doo Show appeared as a recurring characters on Dynomutt, assisting the Daring Duo in cracking their crimes. Originally distributed by Hanna-Barbera's then-parent company Taft Broadcasting, Warner Bros. Television currently holds the television distribution to the series. Between January 2 and March 9, 2008, repeats of Dynomutt, Dog Wonder were shown on Boomerang. On June 4, 2009, Dynomutt, Dog Wonder returned to Boomerang and airs Thursdays through Sundays at 10am Eastern.